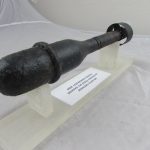 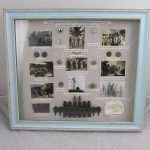 WW2 US Army Rocket Launcher, (bazooka), grenade 1942,found in Normandy in the same area as the Rifle grenade in 2004.

Also referred to as the ‘stove pipe’, the Bazooka was the first generation rocket propelled anti tank weapon used in infantry combat.

18 Inches in length and in Relic condition , no fins, and inert.

This item is nicely mounted on a perspex stand.

Bazooka (/bəˈzuːkə/)[7] is the common name for a man-portable recoilless anti-tank rocket launcher weapon, widely deployed by the United States Army, especially during World War II. Also referred to as the “Stovepipe”, the innovative bazooka was among the first generation of rocket-propelled anti-tank weapons used in infantry combat. Featuring a solid-propellant rocket for propulsion, it allowed for high-explosive anti-tank (HEAT) warheads to be delivered against armored vehicles, machine gun nests, and fortified bunkers at ranges beyond that of a standard thrown grenade or mine. The universally-applied nickname arose from the M1 variant’s vague resemblance to the musical instrument called a “bazooka” invented and popularized by 1930s U.S. comedian Bob Burns.

During World War II, German armed forces captured several bazookas in early North Africa[8][9] and Eastern Front encounters and soon reverse engineered their own version,[8] increasing the warhead diameter to 8.8 cm (among other minor changes) and widely issuing it as the Raketenpanzerbüchse “Panzerschreck” (“rocket anti-armor rifle ‘tank scare'”).[8] Near the end of the war, the Japanese developed a similar weapon, the Type 4 70 mm AT Rocket Launcher, which featured a rocket propelled grenade of a different design.[10]

The term “bazooka” still sees informal use as a generic term[11] referring to any ground-to-ground shoulder-fired missile weapon (mainly rocket propelled grenade launchers or recoilless rifles), and as an expression that “heavy measures” are being taken.[11