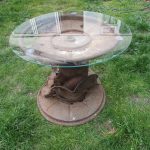 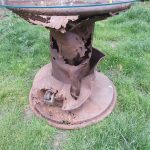 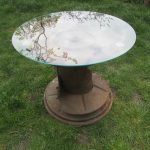 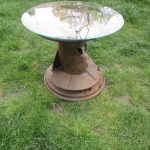 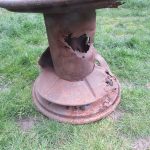 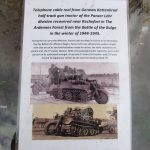 Recovered near Rochefort in The Ardennes Forest, Battle of the Bulge in the winter of 1944-45. This Panzer Lehr division Telephone cable reel from the German Kettenkrad, half track gun tractor.has been made into a table by the adding of a plate glass top. This item is of relic condition but by making it a table has now a function again, great piece.

During the run up to the offensive, Panzer Lehr was kept in reserve on 15 December the day before the offensive began , Panzer Lehr was still severely under strength, with only one of its two tank battalions ready for action , the other restored to its parent unit, the 3rd panzer division. Both of its panzer grenadier regiments were at 80 percent of its authorised strength. It had only 57 tanks (30 panthers and 27 panzer 1v) and 20 Jagdpanzer 1v/70s by the time the attack jumped off.

Due to the size of this item , there will be a delivery price , or can be picked up .

Be the first to review “Telephone cable reel, Battle of the Bulge, from German Kettenkrad, half track gun tractor.” Cancel reply