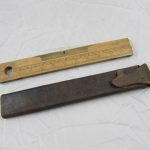 Blue cloth inside with pull string. Cant read the maker as worn away. Item has a couple of small moth holes to the top but otherwise is clean. Oil skin material to the inner lining.

The uniforms of the Royal Navy have evolved gradually since the first uniform regulations for officers were issued in 1748.[1] The predominant colours of Royal Navy uniforms are navy blue and white. Since reforms in 1997 male and female ratings have worn the same ceremonial uniform.[1]

RN uniforms have served as the template for many maritime uniforms throughout the world, especially in the British Empire and Commonwealth. The uniforms of the Royal Naval Reserve, Royal Fleet Auxiliary, the Maritime Volunteer Service, the Sea Cadet Corps, the Navy branch of the Combined Cadet Force and the Volunteer Cadet Corps as well as modern uniforms of Trinity House, the Royal Australian Navy, the Royal New Zealand Navy and Royal Malaysian Navy are virtually identical to RN uniforms, with the exception of flashes at shoulder height and on rank slides. Royal Canadian Navy uniforms are also very similar, though the traditional sailor suit is no longer used and some distinctly Canadian rank insignia and titles are used; e.g., master sailor.

Uniform for ratings was first established by the Admiralty in 1857. Prior to this, most seamen wore “slops”, or ready-made clothing sold to the ship’s crew by a contractor; many captains established general standards of appearance for the seamen on their vessel, but there was little or no uniformity between ships. On one occasion in 1853, the commanding officer of HMS Harlequin paid for his boat crews to dress as harlequins, an incident which may have contributed to the Admiralty’s decision to adopt a standard uniform.[1]

A number of changes have been introduced since the introduction of the first rating uniform, notably the removal of the blue jacket in 1890, and the replacement of bell-bottoms by flared trousers in 1977. In 1997 there was a major standardisation programme, meaning that all ratings now wear the same ceremonial uniform for the first time in history.[1]