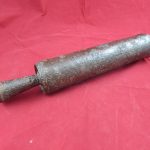 This is an  Relic from Verdun , came in with another item  from the same area, which was a rare Winchester, in the same relic condition. of which was sold a while ago  but just got round to cleaning this piece . 95 % of this piece is still intact, but part of the butt area is lost.

Obviously this piece is solid and has not for over the past 100 years seen movement.   The piece has been mounted for display and comes on perspex bases.

The Model 1886 was made in great numbers during WW1, but  this one ended its days and was found  at Verdun .

The Lebel Model 1886 rifle (French: Fusil Modèle 1886 dit “Fusil Lebel”) also known as the “Fusil Mle 1886 M93”, after a bolt modification was added in 1893, is an 8 mm bolt-action infantry rifle that entered service in the French Army in 1887. It is a repeating rifle that can hold eight rounds in its forestock tube magazine, one round in the elevator plus one round in the chamber. The Lebel rifle has the distinction of being the first military firearm to use smokeless powder ammunition. The new propellant powder, “Poudre B,” was nitrocellulose-based and had been invented in 1884 by French chemist Paul Vieille. Lieutenant Colonel Nicolas Lebel contributed a flat nosed 8 mm full metal jacket bullet (“Balle M,” or “Balle Lebel“). Twelve years later, in 1898, a solid brass pointed (spitzer) and boat-tail bullet called “Balle D” was retained for all 8mm Lebel ammunition. Each case was protected against accidental percussion inside the tube magazine by a primer cover and by a circular groove around the primer cup which caught the tip of the following pointed bullet. Featuring an oversized bolt with front locking lugs and a massive receiver, the Lebel rifle was a durable design capable of long range performance. In spite of early obsolete features, such as its tube magazine and the shape of 8mm Lebel rimmed ammunition, the Lebel rifle remained the basic weapon of French infantry during World War I (1914–1918). Altogether, 3.45 million Lebel rifles were produced by the three French state factories between 1887 and 1916.[2]