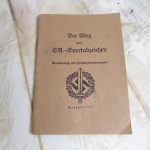 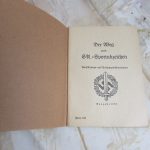 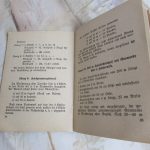 German S.A. 1937 Sports Badge Booklet. Original 1937 official 3rd Reich guide on how to achieve the SA sports badge, booklet was published in 1937 by the SA leadership in Munich. It contains all laws , regulations, subjects of examination and expected scores the applicant had to achieve. A great RARE booklet for those who own the badge. The applicant had to be Aryan and support the NS ideology. Adolf Hitler created the SA sports badge in feb 1935 to harden Aryan men.

The SA Sports Badge was a decoration of Nazi Germany that was issued between the years 1933 and 1945. It was a political version of the much more generic German Sports Badge, which was also issued in great numbers by the Nazis.

The SA Sports Badge was instituted on 28 November 1933 by then SA chief Ernst Röhm. It was originally only issued in bronze through the year 1935. On 15 February 1935, Hitler decreed that the badge be officially recognized. It was thereafter issued in three grades (bronze, silver, and gold). No longer was the physical fitness badge to be awarded only to SA members, but to youth of all German military and paramilitary organizations. Originally the badge grade was awarded on degrees of “proficiency”. Then in 1936, a points system was established. In 1937, the requirement for the holder of the award was upgraded; each recipient had to pass an annual proficiency test to retain the badge.

On 19 January 1939, Hitler changed the name of the badge from SA-Sportabzeichen (SA Sports Badge) to SA-Wehrabzeichen (SA-Defence Badge). Hitler challenged all able-bodied boys age 16 and up to compete for the award. Older military men were also encouraged to obtain it. The badge was one of the few political decorations that the armed forces allowed to freely be displayed on a military uniform.  By December 1936, one million had been awarded, and by the end of 1943, over 2.5 million had been awarded.