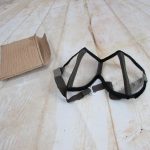 These originals are rare to find today

The Women’s Royal Naval Service (WRNS; popularly and officially known as the Wrens) was the women’s branch of the United Kingdom‘s Royal Navy. First formed in 1917 for the First World War, it was disbanded in 1919, then revived in 1939 at the beginning of the Second World War, remaining active until integrated into the Royal Navy in 1993. WRNS included cooks, clerks, wireless telegraphists, radar plotters, weapons analysts, range assessors, electricians and air mechanics.

From 1939, Wren uniform consisted of a double-breasted jacket and skirt, with shirt and tie, for all ranks (although similar working dress to the men could also be worn). Junior Ratings wore hats similar to those of their male counterparts (although with a more sloping top). Senior Ratings (Petty Officers and above) and officers wore tricorne hats with a white cover. All insignia, including cap badges and non-substantive (trade) badges, were blue.