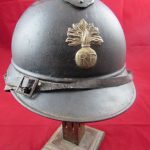 Some original green paint can be seen on the surface.

The armies of major European powers introduced helmets of this type during World War I. The German Army began to replace the traditional boiled leather Pickelhaube (‘spiked helmet’) with the Stahlhelm in 1916. The Stahlhelm, with its distinctive “coal scuttle” shape, was instantly recognizable and became a common element of propaganda on both sides, just like the Pickelhaube before it. The name was also used by Der Stahlhelm, a German first World War ex-servicemen‘s organization existing from 1918 to 1935. After World War II, the German Bundeswehr (English: Federal Armed Forces) continued to call their standard helmet Stahlhelm, but the design was based on the American M1 helmet. The Bundesgrenzschutz (English: Federal border service), however, continued to use the original German design, until both troops switched to the new M92 Aramid helmet.[clarification needed][1]