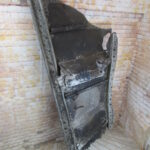 Battle of Britain ME110 Undercarriage Tyre

Relic tyre from a ME IIO German aircraft ,number WN3116..I/ZG2 shot down August 1940.This aircraft was shot down by RAF fighters during an escort sortie over Winchester. It crashed at Noprth Baddesley at 4pm on the 13th August 1940. It is thought that Fritz Larsbusch was the gunner of the plane , who bailed out but unfortunately his parachute failed to open , he was buried locally until the 1960s when his body was repatriated back to Germany.This tyre is of German manufacture ( Continental), this is one of the undercarriage tyres, this and other bits were excavated in the early 1990s. This is a large heavy piece.

Be the first to review “Relic, Battle Of Britain, ME110 tyre” Cancel reply