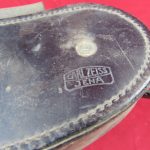 Unusual find , just come over from Ypres in Belgium , This 1908 Cavalry trooper’s sword .

What can i say about it , its rusty, and no i cant get the blade out , this is a sound Relic, its all there , all i know is that it came from a collection and was originally found some 40 years ago . The collector was a local man to Ypres. The hilt and scabbard are as the photo’s show.

The 1908 Pattern Cavalry sword was the last and the best service sword issued to the British Army. and was in service from 1908- 1918.

The Pattern 1908 cavalry trooper’s sword (and the 1912 Pattern, the equivalent for officers) was the last service sword issued to the cavalry of the British Army. It has been called[3][4] the most effective cavalry sword ever designed, although its introduction occurred as swords finally became obsolete as military weapons. In use, it, like other thrust-based cavalry swords, is best described as a one-handed lance, due to its complete lack of utility for anything but the charge. In fact, the closely related US Model 1913 Cavalry Saber was issued with only a saddle scabbard, as it was not considered to be of much use to a dismounted cavalryman. Colonial troops, who could expect to engage in melee combat with opposing cavalry frequently carried cut and thrust swords either instead of, or in addition to, the P1908/1912.

In military circles there had long been the debate over whether the use of the point or the edge was the better method of attack for a cavalryman. In the Napoleonic period, British cavalry doctrine as shaped by John Gaspard Le Marchant favoured the cut, resulting in the dramatically curved Pattern 1796 light cavalry sabre. With the introduction of the 1822 patterns, the British Army adopted a series of “cut and thrust” swords with slightly curved blades which were theoretically stiff enough for a thrust. The 1822 swords and their descendants were inevitably compromises and not ideal for either cutting or thrusting, but the Army considered the adaptability to be of more importance.[citation needed] By contrast the 1908 pattern was designed from the outset purely to give point (thrust) from horseback.

The sword has lived on as the ceremonial sword for the British, Canadian, and Australian cavalry units.