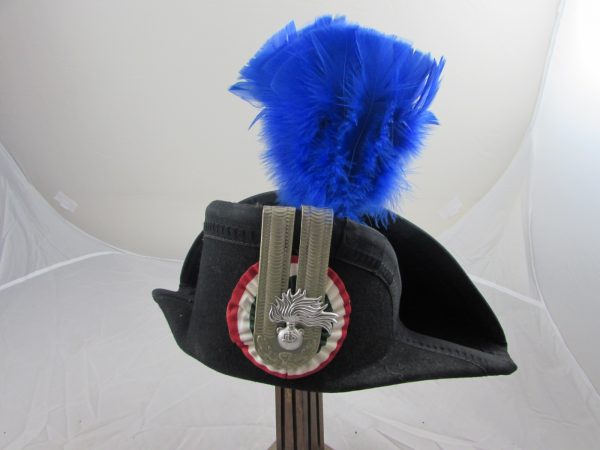 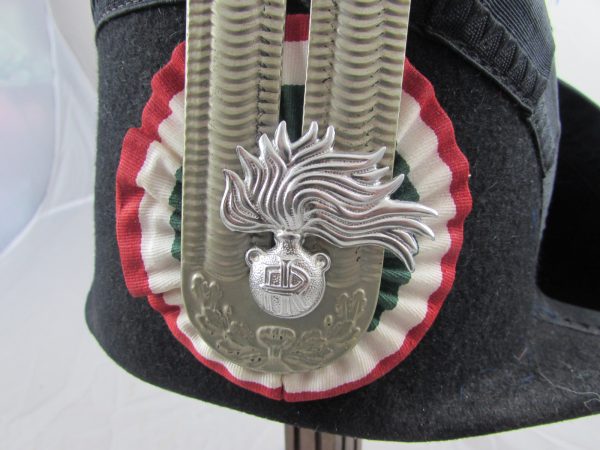 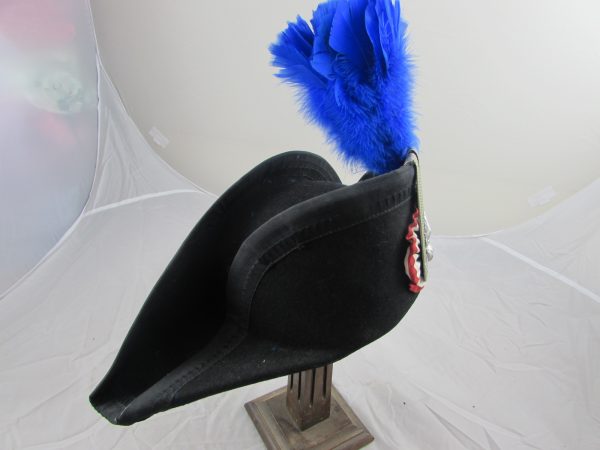 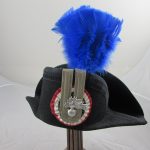 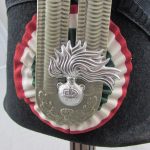 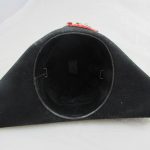 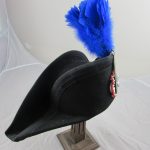 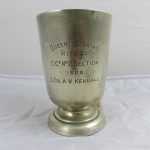 Lovely condition Italian Carabinieri Lucerna ( Bicorne Hat ) probably 1970s and made for Ceremonial use , this is a great example of military police headress.

The bicorne or bicorn (two-cornered) is a historical form of hat widely adopted in the 1790s as an item of uniform by Europe and American army and naval officers. Most generals and staff officers of the Napoleonic period wore bicornes, which survived as widely-worn full-dress headdress until the 20th century.

Descended from the tricorne, the black-coloured bicorne originally had a rather broad brim, with the front and the rear halves turned up and pinned together forming a semi-circular fan shape; there was usually a cockade in the national colours at the front. Later, the hat became more triangular in shape, with its two ends becoming more pointed, and it was worn with the cockade at the right side. That kind of bicorne eventually became known in English as the cocked hat, but it is still known in French as the bicorne.

Worn in the side-to-side athwart style during the 1790s, the bicorne became normally seen fore-and-aft in most armies and navies from 1800. The change in style coincided with the flattening out of the pronounced front peak of the original headdress. The French gendarmerie continued to wear their bicornes in the classic side-to-side fashion until about 1904, and the Italian Carabinieri still do so in their modern full dress.

Some forms of bicorne were designed to be folded flat so that they could be conveniently tucked under the arm when they were not being worn. A bicorne of such a style is also known as a chapeau-bras or chapeau-de-bras.

The bicorne was widely worn until World War I as part of the full dress of officers of most of the world’s navies. It survived to a more limited extent between the wars for wear by senior officers in the British, French, US, Japanese and other navies until World War II but has now almost disappeared in that context.

In addition to its military/naval uses, the bicorne was widely worn during the 19th and the early 20th centuries by civilian officials in European monarchies and Japan when it was required to wear uniforms on formal occasions. The practice generally ceased after World War I except in the context of diplomatic uniform. However, British colonial governors in temperate climates and governors general in some countries of the Commonwealth (notably Australia, Canada and New Zealand) continued to wear bicornes with ceremonial dress