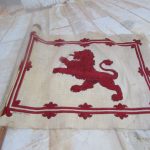 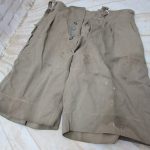 WW2 German M35 Helmet  Double decal with Luftwaffe to one side, fully marked inside ET64 to side and 3799 to rear edge.

Original liner rim to inside with chinstrap loops, only two of the three helmet studs, but not hard to find another.

Some of the original paintwork retaining on the outside , see photo’s. possibly either a sandy or a white finish. Lovely patination to this helmet, and nice to find an unmolested one.

There is a bit of damage to the rear folded edge , please see photo’s . But this is still a nice sound helmet.

Decals are 100% original to this helmet .I’m afraid i don’t have any provenance  to this piece as its just come in from Germany.

The Stahlhelm (German, ‘steel helmet’) is a specific type of German military headgear made of steel, which is primarily intended to provide protection against shrapnel and fragments of grenades. The term Stahlhelm refers both to a generic steel helmet and more specifically to the distinctive German military design.

The armies of major European powers introduced helmets of this type during World War I. The German Army began to replace the traditional boiled leather Pickelhaube (English: pointed headgear) with the Stahlhelm in 1916. The Stahlhelm, with its distinctive “coal scuttle” shape, was instantly recognizable and became a common element of propaganda on both sides, just like the Pickelhaube before it. The name was also used by Der Stahlhelm, a German first World War ex-servicemen‘s organization existing from 1918 to 1935. After World War II, the German Bundeswehr (English: Federal Armed Forces) continued to call their standard helmet Stahlhelm, but the design was based on the American M1 helmet. The Bundesgrenzschutz (English: Federal border service), however, continued to use the original German design, until both troops switched to the new M92 Aramid helmet.[clarification needed][1]