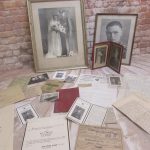 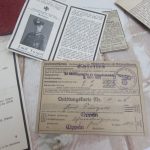 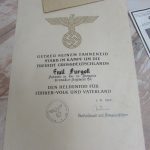 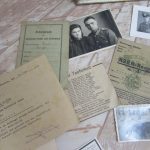 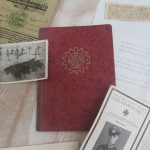 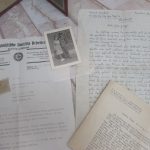 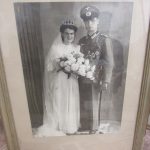 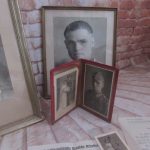 Large collection of photo’s and paperwork from Emil Furgol German army,
Born 05-01-1916,Oppelin,Germany,Married Ottille on 12-09-1942,
Member of the German working front since 01-10-1937,
Soldier, Sargent in 14th Company Grenadier (Anti Tank Comp) reg 84. Disability insurance (small brown card with blue stamps) valid from 09-04-37.
Small green book (shooting record and training)
Small brown book with green stamp to front membership ID to NSKK.
Red book with quote from Hitler.
He was of slim statue, grey eyes , height 1/65m, dark blonde hair, Professional Tailor,
Died heroic death for leader , nation and country , died from a grenade on 31-12-1942, buried 30k south of Rschew, (Rzchev) Soviet Union.
During the Battle of Rzchev, 1942-43 otherwise known as the Meat Grinder of the Eastern Front, this was due to the amount of overwhelming losses of the Russian troops,
This collection comes with many photo’s some framed ,and also picture of grave.
There is also a letter from the commanding officer to this mans wife telling her of his death.