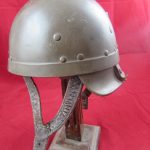 Nice plaque of the Prince of Belgium, or King of the Belgium’s.1909-1934, fully dated , has a a relief of the man in full military uniform and insignia, artist signature is A. MARNETH.A A good original piece, well cast heavy item.

Albert I (8 April 1875 – 17 February 1934) was King of the Belgians from 23 December 1909 until his death in 1934. He ruled during an eventful period in the history of Belgium, which included the period of World War I (1914–1918), when 90 percent of Belgium was overrun, occupied, and ruled by the German Empire. Other crucial issues included the adoption of the Treaty of Versailles in June 1919, the ruling of the Belgian Congo as an overseas possession of the Kingdom of Belgium along with the League of Nations mandate of Ruanda-Urundi, the reconstruction of Belgium following the war, and the first five years of the Great Depression (1929–1934). King Albert died in a mountaineering accident in eastern Belgium in 1934, at the age of 58, and he was succeeded by his son Leopold III (r. 1934–1951). He is popularly referred to as the Knight King (roi-chevalier or koning-ridder) or Soldier King (roi-soldat or koning-soldaat) in Belgium in reference to his role during World War I.